We end our fenomenal girls’ series this year with AJ Wurtz, from Midland, Texas. She is 9 years old, loves jiu-jitsu, color purple, and One Direction. When AJ grows up, she wants to own a bakery. Everyone meet AJ!

How did you get started and how long have you been training?

My whole family trains at Bruno Bastos BJJ, in Midland, Texas, but my older brother started first. I used to go and watch him train. The kids’ class looked a lot of fun and I wanted to try it. I have been training for almost a year now, and I am a four stripe white belt.

My favorite part is learning new techniques. I like to learn and try new things. I also love all of my BJJ friends and my coaches.

Do you like to compete? What is your favorite tournament so far? 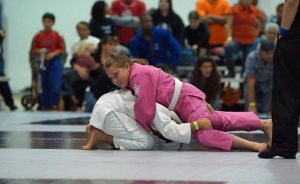 I like to compete. My family has competed three times. Competing is fun but also challenging for me because I compete against girls and boys. My favorite tournament so far was Fight to Win Torque in Dallas, Texas. It was the first one for my whole family. I got a bronze medal, and got to go to Six Flags the next day.

What is your favorite submission?

I like armbars a lot. I also get to train judo with one of my coaches, and my favorite judo technique is o-goshi which is a hip throw.

Do you ever get bored in training?

No, I don’t get bored because my coaches make training fun. I’m always ready for class, and also love seeing my friends.

Who do you look up to in BJJ and in life general?

What do your friends think about BJJ?

My friends like that I train jiu-jitsu and think it is awesome! They think my gis look cool. I wish they could watch me compete. 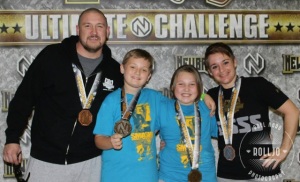 This is what AJ’s mom and dad had to say:

Mom: AJ has the biggest loving heart. She doesn’t discriminate against anyone. The first time she was ever in big trouble at school was because she stood up, and defended her friend who has a physical disability. She was sent to the office for pushing the kid who made fun of her friend who is missing parts of his feet. Needless to say, she was not in trouble when she got home. I praised her for standing up for her friend.

Dad: AJ loves to talk. A lot. She is also extremely competitive with her big brother. One day in kids class, her talking and arguing with her brother got her into some trouble with her coaches. They both ended up in the corner, facing the wall but having to hug each other the whole time until her coach was sure they had learned to love each other again. I will never forget that day.

At first AJ was not very motivated to train. However, I saw that she did not like to lose in sparring, so I realized that she had a competitive spirit. I asked her if she would like to compete. AJ competed and lost her match. She was upset and cried, but started training more and harder after the loss.

She is motivated by challenges. If she is motivated, she goes after what she wants and that has made her much more successful in tournaments. I try to teach my students to do the best they can every day, not only in jiu-jitsu, but also in school and at home. Always try to fight for what you believe is worth. AJ is a good role model because she fights for what she believes in and has a great attitude doing it.