Women’s jiu-jitsu in Mexico is a very young sport. The highest ranked women are purple belts. One of the purple belts, Itzel Bazua, has big dreams. With limited resources but with lots of passion, she is taking the initiative to be the leader and bringing on the change. Everyone meet Itzel Bazua! 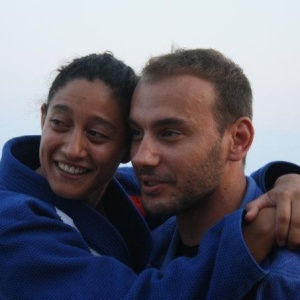 I was born and raised in Mexico City. I am a neurolinguist and have a Psychopedagogy Degree. I am the Director of the Family Resiliency Project which guides children with disabilities, and their families towards an independent and joyful lifestyle. I have a very strong academic background, I teach at a university and I’m an international congress speaker and advisor. I have grown and matured both in my academic activities and BJJ simultaneously, and I find many common grounds in both fields, especially  now that I’m working a lot with cerebral palsy, and the awareness and control over the body.

Right now I’m in the transition period. I have decided to dedicate most of my time to BJJ. I am teaching all female and kids’ classes at my house. This project is called Promahos Jiujitsu, and I hope to turn it into something big and meaningful.

You are one of the highest ranked female BJJ practitioners in Mexico. How did you get started?

I’m the second highest ranked but the highest ranked that is actively competing. I used to be a contemporary dancer but back in 2003 my school closed, and I had to look for another activity. A high-school friend told me a little bit about BJJ, and I was very interested. He loaned me a gi, and invited me to train. Since then I have had ups and downs but my love for the sport has only grown. I train at Escola Mente e Corpo Jiu Jitsu in Mexico City. We are affiliated with Team Brasa, and my instructor is Tomas Salgado, a black belt under Felipe Costa.

How has your training been so far? What have been the biggest obstacles? 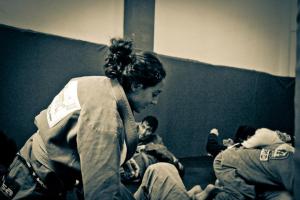 When I started training I liked BJJ but I did not feel comfortable in my school. I was the youngest, the smallest, and the only female. I felt like a little girl who was going to work with her father. Nobody took me seriously or practiced any technique with me properly. Some guys even said, let’s roll but because you are a girl, I will use one arm or let’s roll so I can warm up.

So I stopped training, and did not believe that I could achieve anything. In 2005 I went back to train. The friend who had introduced me to BJJ was now teaching. I suffered a bad sciatic nerve injury, and had to take some time off again but in 2007 I managed to fully return to training. Around that time I also met a purple belt, Tomas Salgado, who has now become a black belt and is my instructor. I cannot stress how thankful I am to him because he believed in me even when I did not. He pushed me until I started believing in myself. He supports me on and off the mat. Without him I don’t think I would have ever gotten past the white belt.

What have been the most rewarding moments?

The most rewarding moment was when I got my purple belt from Felipe Costa because it meant a lot of hard training and overcoming obstacles. Meeting all the incredible people in the BJJ community is pretty amazing too. I have friends all over the world! I met my boyfriend, Evans Merkouris, at the Brazilian Black Belt Camp in Greece. Something very important about this sport is that it forces you to grow in many aspects, human and intellectual. I believe that I am the person I am today because of BJJ.

Are there any opportunities for women to compete in Mexico?

There are more and more opportunities every year. I have been competing since 2008 as much as my budget has allowed. Sadly, in my category there are never more than four girls, and it is a mix of blue and purple belts. The problem in Mexico is that BJJ is not a priority in many people’s budget. For example, in order to get to the  Brazilian Black Belt Camp, I had five jobs and sold many of my possessions. Most girls have different priorities and don’t compete much.

You are organizing the women’s camp with Mackenzie Dern. Tell us more about how you came up with that and why Mackenzie?

The camp was an idea inspired by my friend Keitha Bannan, the very first female black belt in New Zealand. She does an amazing job promoting the sport, and advised me through her experience. This event has the sole objective of promoting the sport in the female community. I met Mackenzie in Greece in 2011, we became good friends, and kept in touch. I admire her for many reasons but mainly because she trains very hard, is very technical, and has true love for the sport. When I told her about this project, she supported me completely. 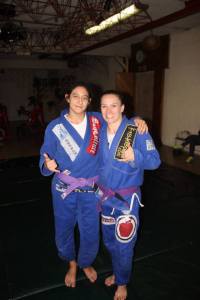 Unfortunately we had to postpone the first camp due to Mackenzie’s injury. She requires some time off from training, and we are working on new dates for the camp for 2014. It will be even bigger than the one we were planning for this year. I’m excited and wish Mackenzie a fast recovery.

However, this month we had pleasant surprise visitors from Australia. Purple belt world champion Livia Gluchowska and her boyfriend, Lachlan Giles, who is a black belt, spent a few days in Mexico City sharing their knowledge with us.

Have you had a chance to attend any women only training camps or seminars?

Unfortunately I have not been able to attend all female events abroad because of the budget constraints. I would love to go to the Inspire All Female Open Mat, and to any other events where all affiliations and associations are welcome. Hopefully we can have something similar here in Mexico soon as more women are starting to take interest in jiu-jitsu.

I would like to just encourage any girl that has enough rank to try teaching, and helping other girls along the way. It is very rewarding! Many girls do not believe that this sport is for them but training with other girls is safe and fun!