Amazonian Women’s Jiu-Jitsu is a Florida based organization that Stephanie Dodge started little over a year ago. She organizes free monthly open mats, seminars, and women only camps with well-known world champions.

This is how Stephanie describes an Amazonian woman: A woman who is powerful, beyond limits, confident and beautiful. She is a kindred spirit versed in the art of Brazilian jiu-jitsu. She is a warrior. Stephanie was kind enough to sit down with us, and talk about what’s happening in Florida.

I am a registered nurse at JFK hospital in Florida. I am a wife and a mother of 2 girls, ages 3 and 8. I got started in BJJ through my husband Jason. He was looking for a gym to train MMA and we started training together. At first I was a little apprehensive but quickly realized that jiu-jitsu is a great self-defense for women, and I wanted to learn the counters to the techniques my husband was testing in me. Currently I am a 3 stripe blue belt under Manoel Soares and train at Jaco Hybrid Training Center, home of the Blackzilians, in Delray, Florida.

How did Amazonian Women’s Jiu-Jitsu get started?

I got the idea to start Amazonian Women’s BJJ when I met 2 other girls that trained. Prior to meeting these women, I had been the only woman at my gym and sometimes, or a lot of the time, men didn’t really know how to roll with women. So I asked the 2 other girls to come and train with me once a month so we could help each other to get ready for tournaments.

Around that time I also met Michelle Nicolini, and asked her if we could do a women 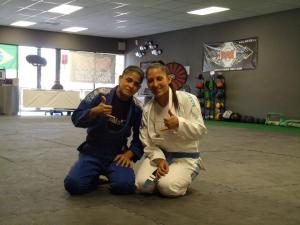 only seminar with her followed by and open mat. She loved the idea and that’s how it started. We had the seminar with Michelle, and at the event I met another female black belt, Sofia Amarante. She invited me to train with her at her gym in Lauderhill, FL. I asked if we could do an open mat and invite women all over Florida to come and train for free. Sofia liked the idea and we had our 1st Amazonian Women’s Open Mat in March of 2012. It was a great success. Since then we had an open mat almost every month at a different gym. The 13th one was just a few weeks ago.

Do you run Amazonian Women’s Jiu-Jitsu alone or do you have any help?

I do all the planning for each event on my own. I do depend on the women who attend to ask their professors if the next event could be at their gym. Once I have a location, I plan time, set up the event page and start promoting. Fenom Kimonos has always helped with the event flyers and we share them all over Facebook, bringing in new women at each event. I honestly couldn’t have a successful event every month if the women didn’t do their part in spreading the word among their friends and team.

What has been the biggest challenge in organizing the open mats? Have you been able to participate in every event?

I think the biggest challenge is not to get stressed out, and taking the time to remember why I started this. Sometimes I worry about if enough girls will show up, if they like the technique, if they like the training, etc. But when I sit back and watch, I realize that even if there are 10 girls instead of 30, we still have a great time rolling, talking, and eating afterwards. As long as we learn from each other and have an open mind, it’s a success.

I have participated in every event except for one, when I hurt my shoulder. I was there on the mat with the girls, but could not physically do the technique and roll. It was difficult to sit and watch, but I got to coach instead, helping girls get ready for various tournaments.

Amazonian Women’s Jiu-Jitsu celebrated its 1st anniversary recently. What events did you have in 2012 and which one was the most memorable so far?

The first open mat had a huge turnout. Then we had a training camp with Michelle Nicolini and Sofia Amarante, which was also a success with women participating from all over the east coast. Later in 2012, we had Leticia Ribeiro seminar which was a lot of fun. She is one person I look up to. Meeting her and learning a little bit of her jiu-jitsu was amazing.

One of the most memorable events was the open mat at Roberto “Cyborg” Abreu’s FightSports Miami. We had a lot of participants and he said some very important words which I like to go back to from time to time. He said that even though we are from different academies, and fight each other at tournaments, doesn’t mean we cannot be friends. Some of my best friends are girls I met on the mat. When we fight, we fight, but as soon as the fight is over, we walk off the mat hugging and thanking each other for a good roll. This is important for all the Amazonian women to remember. 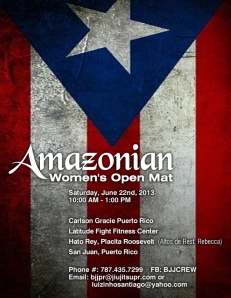 What are the plans for the group for this year?

This year started off with some great open mats and our 1 year anniversary. We are planning to have an open mat at Carlson Gracie Puerto Rico in June, then we will be in the Bahamas in July for a women’s self-defense seminar, where I will be teaching some techniques. This is part of the 4-day BOMAC martial arts competition. I am hoping to have either a camp or a seminar with Michelle Nicolini and Sofia Amarante once again, and a camp with Leticia Ribeiro as well. These women are my biggest inspirations in jiu-jitsu.

Do you travel to any other women’s camps or open mats? If not, is there an event you would like to attend?

There are great groups in Boston, New York City, Texas, California, Arizona, Michigan, Seattle, and Canada. Couple of brand new ones are starting up in Maryland, Mississippi, North Carolina, and Virginia. I would love to go visit all of them at some point. It’s awesome to see how we are growing.

Is there anything else you would like to add?

A huge thank you to all the black belts that have welcomed us to their schools and shared some of their knowledge. I would also like to thank Triin Seppel with Fenom Kimonos for always helping out with the beautiful flyers, sponsoring us, and promoting the events each month.

Lastly, I want to thank all the women who have supported Amazonian Women’s BJJ. Whether you have been to one open mat or to all of them, I appreciate you taking time out of your schedule to train with us, and help support me, and my dream of bringing BJJ to more women everywhere. Thank you, train hard and I’ll see you on the mat! 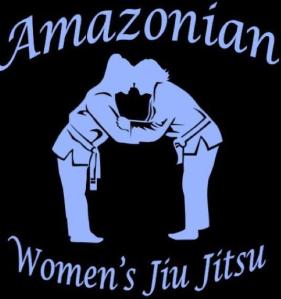