Our fenomenal woman for August is Tessa Simpson, a 26-year old Gracie Humaitá brown belt who grew up in Guam, and now resides in Austin, Texas. She is the proof that if you work hard and are nice, amazing things will happen. She is definitely a champion on and off the mat. Everyone meet Tessa Simpson! 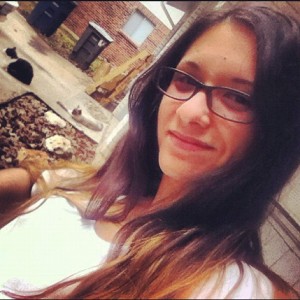 Tell us about yourself.

Well, I would summarize myself as a well-rounded, and goal-oriented person. I work full-time as a web developer, and I just opened a kickboxing academy with my fiancée in December. I teach private lessons, I am a photographer, a step-mom, and spend the rest of my time training.

I am very passionate about training, and I have the same drive for being an entrepreneur. Being a business owner has been such a rewarding experience. I also find that owning a business is a lot like jiu-jitsu. It’s a constant learning and challenge, and I’ve discovered that I am really happy when I am being challenged.

How did you get into BJJ and where do you train now?

Growing up I was really close to my older brother, and usually tagged along with him. He started training jiu-jitsu, and I asked if I could try it as well. I really enjoyed it and started training consistently. This was 9 1/2 years ago, but after about 6 months of training, I tore my ACL playing basketball, so I had to take about a year off before getting back on the mat.

Now I train at Gracie Humaitá Austin. I don’t get to go as often since starting up our own business, and it depends on what I’m training for at the time. I would like to go to BJJ 4-5 times a week. I do Muay Thai and boxing at my gym, as well as crossfit with Fortitude Fitness who shares our space. So in total, I train at least 5-6 days a week and squeeze most of it in back to back in the evenings.

Did you do any other sports before BJJ?

I really enjoyed playing sports growing up, and tried as many different sports as I could. I played basketball, volleyball, soccer, ran cross-country and 5K’s, and at the time I discovered jiu-jitsu, I was a competitive paddler in outrigger canoeing. I would go from paddling practice straight to BJJ. However, jiu-jitsu was the first martial art that I practiced.

You grew up Guam, how did you end up in Austin?

I lived in Guam until I was 17, then I moved out to Texas for college. My brother lives in Austin and I had visited a university here before my senior year of high-school. We learned that by making him my legal guardian, I would be able to pay in-state tuition without having to have lived here for a year or more like in any other state. I didn’t have too much of a choice of where to go knowing that, so I ended up in Texas. Fortunately, Austin is a great place 🙂

What are the biggest challenges for you? How do you manage to stay motivated to keep training?

The biggest challenge for me is not having enough time to train and the ability to travel to bigger tournaments to compete.

I don’t ever really think about quitting. I plan on training until I physically cannot train any more. I love jiu-jitsu for so many reasons, and even if I am not competing I would still train for fun. I keep myself motivated in training by setting either small or big goals, both short and long-term. Training for competition is one goal but it’s more about just getting better, and learning a little bit each time I train.

What is your favorite tournament so far? Favorite submission?

The Worlds has definitely been my favorite tournament so far. I’ve wanted to compete at that level for so long but it was always difficult to make the trip to California. Being at the Worlds, alongside the best in the world was very inspiring. It’s funny getting a little star struck seeing people whose game you admire and study on YouTube, let alone warming up right next to them. Ultimately, having a big goal like winning the Worlds was a great motivator to train as much, and as hard as I could. I learned so much training for it, so it was still a win even though I didn’t bring home a medal.

It’s hard to say what my favorite submission is. I like catching armbars from different positions. It was nice catching a toe-hold at the Worlds for the first time in competition.

Women’s jiu-jitsu scene has changed dramatically in the past 4-5 years. What do you think of all the women’s open mats and camps?

I think women only camps and seminars are a great way to open up opportunities for girls to learn, and seek knowledge outside of normal classes. You know you can go and get good technique, and hard training without the fear of getting hurt due to the size, and strength differences. It also opens up the opportunity for girls that may not want to compete to get to see where they stand among other women at the same level from other academies. It is an excellent way to help inspire those who just started training to stick with it. Texas is a great place for women’s jiu-jitsu, almost every month there is an open mat or a seminar with a world-class athlete.

I admire Leticia Ribeiro for everything she has given to the sport, being a multiple time world champion, and creating women’s bjj camps, giving us the chance to train with her and other world champions.

Tell us a little bit about your gym in Austin. What are your plans for the rest of 2013?

We are called Austin Kickboxing Academy – AKATX and are located in East Austin, less than 10 minutes from downtown. We have a huge 6000 square feet warehouse that sits on about an acre of property, so there is plenty of parking and room for outdoor training. We offer Muay Thai Kickboxing, boxing and kids MMA. We also share some space with a crossfit program called Fortitude Fitness. We’ve been open little over 7 months, and have already built a great team and really positive atmosphere for training. We have people of all levels, including families who train together, people who have never trained any sports or martial art before, and both amateur and professional fighters for competition. 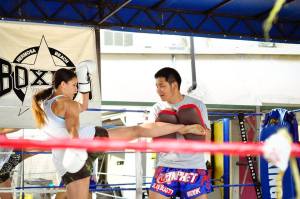 At the end of June, four of our fighters competed in a local amateur MMA event called Belts of Honorious. Next we have fighters getting ready for MMA and boxing events in fall. I will be getting back in the cage in September as well. It has been four years since my last MMA fight, so I’m very excited to  be back out there and test myself!

What are your plans as a black belt?

I have not put too much thought into it as I’m more focused on getting better and becoming more of an active competitor again. I expect to be doing the same thing which is training, working, and competing when I can. I would love to teach jiu-jitsu someday but I know the opportunity will come at the right time if it were meant to happen. For now, I am focused on the learning process, and helping others when I can, even if it is on a smaller scale or indirectly through being an example of someone who works hard to achieve their goals, not only in training but also in life general.

Sue Ausman and Tessa Simpson battling it out. These ladies have had many epic battles and are always fun to watch.