Grapplin’ Gals is a Brazilian jiu-jitsu training group for ladies in Seattle, WA, area. It was started in 2011 and last month Grapplin’ Gals organized their very first 3-day women’s training camp. The founder, Sonia Sillan, talks about the camp and women’s jiu-jitsu in the Pacific Northwest.

I had been on track to go the graduate school after I graduated from the University of Washington, but somehow in my senior year I decided I wanted to try a grappling art. I had practiced Tae Kwon Do for the past 12 years, and I felt I needed to become a complete martial artist. I discovered Brazilian jiu-jitsu and pursued my newfound addiction; now I’ve been training for a little over three years and I’m a 4 stripe blue belt under David Stegman at West Seattle Fight & Fitness, a proud Ribeiro Jiu Jitsu Association affiliate.

I work as an Audiometric Technician by day (meaning I drive around in a 30-ft box truck doing hearing testing at different industrial sites), but that isn’t everything – I am a co-owner of a BJJ lifestyle brand called Roll.Adapt.Win, and West Seattle Fight and Fitness, where I run the Tae Kwon Do program.

When and how did the PNW Grapplin’ Gal group start?

Grapplin’ Gals would not have started if it weren’t for the man in my life, Jei. He convinced me to compete at my first tournament as a blue belt, and I got killed by two awesome ladies. Both of them are good friends of mine now. This experience could have been a negative one, but in all reality it helped me to realize that women need to train with women in order to reach their full potential. I can train with guys all day, but they never go 100% with me, and if they did, it would probably result in an injury.

I wanted to train with other women and although I knew quite a few, I didn’t have the opportunity due to the differing schools. I started Grapplin’ Gals in October 2011 as an unaffiliated women’s only open mat. Even though we didn’t meet consistently, it was great to train and bond with other women whenever we did meet up.

How often do you meet and how many ladies participate at the open mats?

It varies from month-to-month. Now that it has become more established, we are hoping to meet once a month for some quality training. At the first PNW female camp we had 30 participants which is a huge turnout for our area!

How did the first PNW female camp come about? 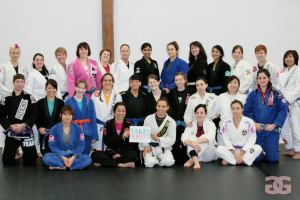 I was inspired by Leticia Ribeiro camp that I attended in 2011 and finally had the means to organize one. We have local black belt women with hidden talents, and it was time to showcase them.

I started planning it around Thanksgiving last year and by Christmas we had the instructors on board and the logistics worked out. My main focus for the camp was to promote women’s jiu-jitsu in the Pacific Northwest, with a secondary motive of uniting the women in the area. It was fascinating to see women from Washington, Oregon, Canada and as far as Massachuchets come together to just train, no drama or politics involved.

I also wanted to do something to support local charities. We donated a portion of the proceeds to New Beginnings, a non-profit organization that advocates ending domestic violence, and several women donated gis to Give the Gift of a Gi project run by Carly Stowell foundation.

The instructors were relatively unknown female black belts (except for Fabiana Borges). Who are they and how did you find them?

I knew both Professors Fabiana Borges and Miriam Cardoso when they trained at Gracie Barra when I first started. I met Professor Andrea Emmel through Professor Miriam. Professor Miriam now has her own school, Elite Brazilian Jiu-Jitsu of Redmond, and although she is a mother, she has her eye on the gold at the Worlds. What many people don’t know about her is that she is a multiple time world champion with a drive to succeed – she doesn’t take no for an answer.

Also, we were pleasantly surprised with the presence of Professor Michelle Wagner, a local black belt from Gracie Barra in Ballard and one of the early pioneers of jiu-jitsu in Washington state. 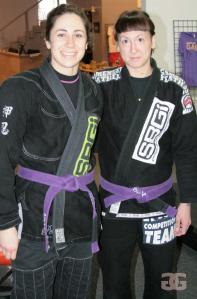 Amanda Loewen and Leah Taylor, two purple belts from Straight Blast Gym in Portland, may seem like a random choice of instructors, but it’s due to the fact that I formed friendships with them through the competition scene. They are both beasts on the mat and two of the most technical women, black belts aside, I have seen in the area.

Amanda is actually one of the women I was talking to regarding the formation of Grapplin’ Gals. She constantly strives to improve herself, and accepts any challenge she is faced with, such as competing and placing in the men’s division. Leah is inspiring because not only did she take gold at the Worlds in 2012, she is also a graduate student keeping up with her studies. All of the instructors involved are inspiring role models and leaders for women’s BJJ in the area, and it was an honor to have learned something from each of them at the PNW training camp.

Do you follow any other women’s open mats, and have you gone to camps in other parts of the US?

I do follow other open mats and actually wish I could travel more often to train. I attended Leticia Ribeiro camp in 2011 as already mentioned. There is a great group of ladies in Vancouver, B.C. running open mats pretty often. I am hoping to get a group of girls together to drive up with me within the next month or so.

I’d also like to give a shout out to United Grappling Federation and one of its founds, Lenna Uhlinger. Last year she organized the first Women’s International Grappling Championship in San Diego. I had the honor of attending it both as a participant and a sponsor with Roll.Adapt.Win and can definitely say it was one of the best experiences I have had in BJJ, besides this training camp of course :). There were lots of talented ladies and it was great to compete against women I had never met before.

What are the plans for Grappling Gals for this year?

Plans are still in the air, so it’s a secret for now but I can guarantee that we will have several events in 2013, and will continue to support New Beginnings with every one.