“Unlike traditional sponsorship programs, the Pro-Partnership approach is designed to create an opportunity for pro-athletes to extend their careers beyond the tournament circuit and local schools while being 100% centered around empowering women,” says Triin Seppel, founder of Fenom Kimonos. “Hannette Staack is a pioneer in not only women’s BJJ but jiu-jitsu as a whole. She represents the women’s jiu-jitsu lifestyle in a way that aligns with our ‘Powered by She’ philosophy. We are so excited to be working with her!”

When asked about her outlook on the new relationship with Fenom Kimonos, Hannette commented, “There isn’t a company who focuses solely on empowering women. Most gi companies create an image around the combat aspect of jiu-jitsu. After training for over 15 years, I can say with confidence that I am a better person because of the struggles and relationships jiu-jitsu has brought to my life. I’m looking forward to a long relationship Triin and Fenom Kimonos.”

About Hannette Staack
Hannette began her jiu-jitsu training when she was 18 years old with Professor Fernando Cruz and Master Flavio Figueiredo, and eventually received her black belt from her current instructor, Andre “Negao” Terencio. Since then Hannette has fought every World Championship, taking several gold medals home and establishing herself as one of the most tenacious and talented female grapplers in the history of jiu-jitsu. She has an impressive record of never been submitted in any competition that she competed, since 1998. 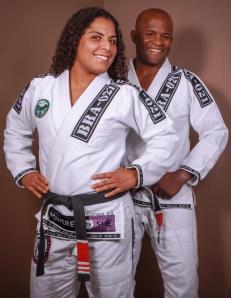 Hannette states that her greatest inspiration toward continuing her jiu-jitsu journey has come from Andre (who is now her husband), as he always inspired her to believe in jiu-jitsu. The two have realized a dream and are now reaping the fruits of their labor in their own academy in Chicago. The team is now gathering between Andre Negão, Hannette Staack, and Carlos Henrique (Andre’s professor) to form Brazil 021 School of Jiu-Jitsu.

About Fenom Kimonos
In the world of martial arts and combat sports, women have always been perceived and viewed to be weaker than men. After all, men are bigger, faster and stronger. That is until Brazilian jiu-jitsu was introduced to the mainstream. Never before has there been a style of fighting and self-defense that legitimately enables the physically smaller and weaker party to not only defend themselves but actually dominate and subdue the attacker.

Brazilian Jiu-Jitsu has enabled women to level the playing field with men like no other martial art. Using scientific principles, techniques can be applied to engage and win. The effect of this phenomenon is profound and empowers women and girls of all ages. On and off the mat.

It is on this foundation that Fenom Kimonos builds its message and mission.