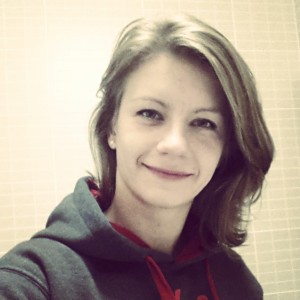 We are pleased to introduce you to our next fenomenal woman, Irena Preiss, a 26-year old brown belt from Krakow, Poland. She is a pedagogy student, follows vegetarian lifestyle, and loves art and cats. She is one of the few female referees in MMA and BJJ in Europe. Read more about what she has achieved so far, and what she wants to do next. Everyone meet Irena Preiss!

How long have you been training BJJ and where do you train now?

I started training in 2003 in my hometown Stargard under coach Tomasz Stasiak from Berserker’s Team. When I saw BJJ for the first time, I was shocked: two guys sweating and laying on top of each other! But then I saw someone tap to a choke, and I decided to try it. It was much different from what you see today. We did not have much knowledge but we loved training, and Tomasz was a super talented coach. After a while I moved to Szczecin and things started moving fast under Piotr Bagiński’s coaching. I won Polish Nationals in 2005, silver at ADCC European trials, and gold at the IBJJF Europeans in 2006 as a blue belt.

Unfortunately, in 2007, at the European Championship I suffered a serious back injury. I could not feel my legs for a few hours. I was forced to quit any kind of sports for two years. 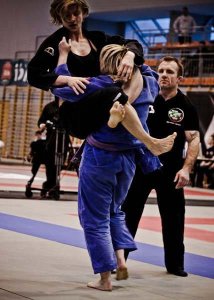 I came back early in 2009 and had the honor of representing Poland at SportAccord Combat Games in Beijing in 2010 where I placed second. I had very successful 2010 and 2011: gold at FILA Europeans, gold at the 2011 Worlds, silver at IBJJF Europeans as a purple belt and qualified for World Pro in Abu Dhabi at Warsaw trials.

Since then I have had ups and downs, I’m recovering from an ACL injury and I focus more on refereeing. Now I live in Krakow, and train at Grappling Krakow under Maciej Szczudrawa.

Did you do another sport before jiu-jitsu and what does your family think of it?

I have always been a very active person. I ran, played basketball and volleyball but nothing as serious as jiu-jitsu. It was just for the pleasure of being active. My other great passion is sailing, probably because of my father who is one of the best sailors in Poland. Now I’m also starting to like CrossFit a lot.

This is actually funny, my parents didn’t know that I had started training. My mom was really scared and thought that BJJ was a hard combat sports and that I would get badly injured in training. I had to hide my training gear outside of the house. After a while she accepted my passion. Now my parents are my biggest fans, they even went to the European Championship with me.

What is your favorite tournament so far? Favorite submission?

The best tournament I competed at was SportAccord Combat Games in Bejing, in 2010. They had the whole show on the Olympic Arena and was very well-organized, it was 110% professionalism, truly outstanding! It was a pleasure to be invited to such a big event. I have never seen same level of organization and hosting again, not even IBJJF or Abu Dhabi World Pro. I did not have much experience back then, and I lacked a lot of confidence. Looking back I see the mistakes that cost me the gold medal.

Here in Poland I always compete against the same girls over and over. The good thing is that they are all very, very good. The bad thing is that sometimes at tournaments there is no-one in my category. I prepare for 3 months and then I have only one match with a much large opponent. I try to travel abroad to compete but it is expensive and depends on the sponsors.

My favorite submission is definitely the triangle. Since I started training, I’ve always tried to catch someone in a triangle. It’s for sure my strongest weapon! 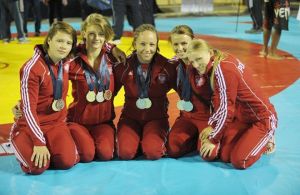 When I trained in Szczecin, I had the best Polish female competitors training with me, so I cannot complain about the lack of women on the mat. Sometimes I train with my good friend Marysia Malyjasiak. She is the best in Poland right now, a purple belt and a world champion. She is heavier than me but girls move differently and we always have good sparring sessions.

Like in tennis, women’s tennis and men’s tennis are two different sports. Same goes with BJJ, women move in a different way, different power. Of course the positions are the same (armbar, triangle, guard pass, etc) but it is still different.

If I have to choose one lady in women’s BJJ that I like to watch the most, I would have to say Michelle Nicolini. In my opinion, she has the best guard, nice leg locks, she can effortlessly move up and down in weight classes and still win gold medals. Luiza Monteiro has a nice style as well, beautiful tactical game, and a nice spider guard.

How did you get into refereeing? Is that something you want to do for a long time?

I consider refereeing as a duty. If you are a higher belt, refereeing is something of an obligation to your local BJJ community. I would like to believe that if some girls see me refereeing black belt finals match, they would think, if she can do it, I can also! Hopefully in the future we can see more women in the center of the mat. When guys see a woman referee, they hopefully start taking us more seriously. MMA is even harder, there are really just a few female referees, you can count them on one hand. I like it, even if it is hard. Exploring and learning new things is fun!

What are your plans for the rest of 2013 and next year?

Because of my injuries I cannot plan what will happen next year. I am trying to train and improve my game as much as I can day by day. My fiancée Maciej is helping me a lot. Even when I have a bad day, he keeps me motivated and drags me out of the bed straight to the gym :).

In October I will be in St. Petersburg, Russia, for SportAccord Combat Games but this time not as a competitor but as a referee. I will try to compete at the Polish Nationals in November and may-be sneak in some triangles!

I would like to organize open mats for girls only. The idea is to build a strong women’s BJJ community in Poland. Of course girls from other countries are welcome to join in! I will also try to find sponsors for 2014 IBJJF European Championship, and hopefully accomplish my ultimate goal – IBJJF World Championship in California.

Is there anyone special you would like to mention?

It would like to thank my sponsors DUEL Wear, MADDOG, and CrossFit Box Krakow. A big kiss to my fiancee Maciej “Sms” Kozak, my parents, and my sister Ewa. Special thanks to my coach Maciej Szczudrawa, Team Grappling Krakow, Berserker’s Team and Random Squad.

Greetings to girls all around the world who train BJJ! Girl power 🙂