We recently connected with Melodie McDonald, the organizer of New Zealand Girls’ Grappling movement and asked her to tell us more about what is happening in women’s jiu-jitsu over there. As it turns out, jiu-jitsu has become very popular in New Zealand. The small but picturesque country already has two female black belts, well-run women’s open mats and training camps. 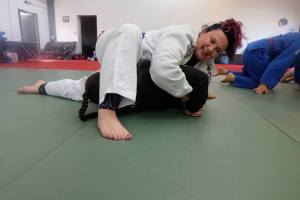 I’m a 39-year-old single mother of a 20-year-old which is pretty scary! I work as a Youth Development Practice and Team Leader with an organization that works with youth at risk. I have been in this field for the past 20 years and love it.

About 12 years ago my boyfriend at the time started doing jiu-jitsu, I went along to watch and was instantly hooked. After a while my boyfriend and I broke up and he stopped training but I continued.

I’ve been on and off the mat for the last 12 years. I’ve trained at Integrated Fighting, Submission Martial Arts and now Oliver MMA. I trained at a Pankration club for the first 3 years and got a green belt in pankration at Integrated Fighting breaking my hand the day before my blue belt grading. I remember sitting mat side bawling my eyes out because I could not do the grading. I then moved to focus on jiu-jitsu at Submission MA earning my BJJ blue belt under Will/Machado in 2010. In 2009 a very good friend of mine suffered a terrible injury on the mat which affected me for a long time and the mat was a haunted place for me. I stepped away altogether in 2010 and focused on promoting MMA and no-gi tournaments in New Zealand. I was the co-owner/promoter of Industry of Combat NZ until 2013 when we closed the doors. During this time I also co-created MMA Officials NZ which is still running supplying officials to MMA fight nights in NZ.

The end of 2014 saw me in a space of not knowing were I belonged in the MMA/BJJ world and was also looking at the prospect of losing my mom. I needed a place that felt like I belonged. I had also moved house in that time so going back to my old club was not going to be an option for me. Making one of the hardest decisions I’ve ever made, I stepped away from Will/Machado and moved to ATTNZ at Oliver MMA. After four years being off the mat I suddenly felt like I was home again. Everyone was so welcoming and friendly. Then five months into being on the mat I ruptured my PCL and was off the mat again. Eeeeek! So fingers crossed I’m back!

When and how did the NZ Girls’ Grappling movement start?

NZ Girls Grappling came about after Sophia Drysdale visited New Zealand in 2011 and talked about how important it was for girls to be rolling and training together having open mats. We began organizing open mats and from there the camp kind of happened. I can’t remember how now. Originally there was a group of us and now it is myself and a purple belt, Shena Christian, who run it.

I’m really passionate about bringing people together and forming good, strong communities. NZ Girls Grappling is owned by the community and anyone is able to do anything they want under this name. People are hosting open mats all over the country. I kind of fell in the leader role because I like organizing and I am pretty vocal and bossy, I have been around and part of the community for a long time and like to make things happen.

How many training camps have you organized and what has been the turnout so far?

We have had 5 camps so far with our last camp hosting 46 women. It was a fantastic event and we are expecting to get this much again in July if not more. We are a nation of only 4.4 million people, so getting this many women to participate is pretty awesome!

This year’s winter camp, July 8-10, features several local brown and black belts and. Can you tell us a little bit about each instructor? 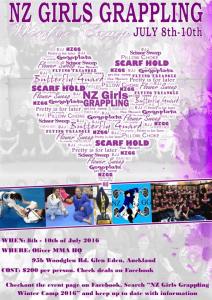 Keitha Bannan is the head of Brasa NZ and Kate is with Gracie Gym NZ run by Roney Da Silva who is her husband. Kate is also a well-known international MMA fighter. I could spend hours writing about these ladies but I wouldn’t do them justice. You should interview them!

What challenges do BJJ women face in New Zealand?

There were so many struggles for women training in jiu-jitsu in the early years. Competition was extremely limited. They would be lucky if one or two girls showed up to compete. Training was just as bad with such small number of females. We have come a long way, and training is much better. A lot of the gyms offer female only classes which allows the ladies to get much more comfortable on the mat before stepping into the mixed class. It’s challenging to find women’s gear but MMA Addict is doing a great job importing apparel for us and always sponsoring our camps.

When I first started, we had I think only one female blue belt in all New Zealand, and now we have 35! Women competing in BJJ and fighting in MMA has never been better, and in fact just late last year Princess of Pain MMA fight night saw 38 women in one day in the ring. This was so cool to see.

When we have open mats, all the girls put their gym politics to the side and just have a great time. Unfortunately, there are still some gyms that do not support us and prohibit their girls from participating in our open mats. We try to befriend them at tournaments and let them know that if they want to sneak into our open mats, they are so welcome, and perhaps can host one.

Tell us something unusual about yourself and New Zealand that many people don’t know.

I turn 40 this year and have decided to have my first MMA fight! I’ve been pretty good at giving people advice about what they should or should not do in the ring over the years, and I decided it was about time I put my money where my mouth is so to speak.