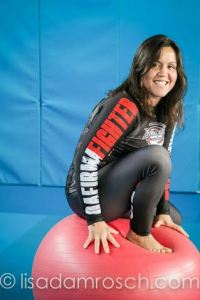 Charlene Coats has dedicated the last 22 years of her life to martial arts. She started in Kami-Do-Ryu style karate, earned multiple state, regional and national titles, and the rank of second degree black belt before heading off to college. She found BJJ in 2006, after earning her bachelor’s degree in Philosophy. After seven years of training six days a week, sometimes multiple times a day, and competing as often as possible, she received her black belt from Raul Castillo in 2013.

What do you do besides training, and competing?

People are often surprised that I’m a nanny. It is hard to believe that I have the time to train full-time and manage the lives of two young girls. As a nanny, I am often a single parent juggling homework, music lessons, play dates, chores, training for the girls, training for myself, and traveling. The girls’ mother is a CFO of a major company, and travels internationally. Their Dad lives in another city so it takes a lot of organization, and diligence. This is why I love jiu-jitsu; it is something for the whole family, and having the girls on the mats is good for everyone! They can do homework at the school, be surrounded by good people, and see great examples of hard work, commitment, and discipline. 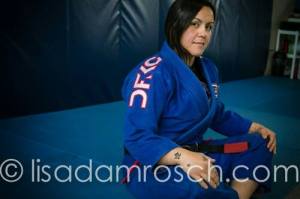 Being a nanny is one of the most rewarding parts of my BJJ journey! The girls get to be part of my success; they get to live a life where they are being cared for everyday by someone who is also stopping at nothing to achieve her dreams. They are learning that if you truly want something, you’ll make it happen through dedicated work because nothing worth having is ever given to you but rather it is earned.

Since the opening of Raul Castillo Martial Arts in 2007, I have been one of the main instructors of the youth BJJ program, the Head Instructor of the kids karate program, competition team, women’s grappling, and the special defenses for special needs youth.

Which was the most challenging belt level for you?

My BJJ journey has not been easy. The girls, and my family have shared my pains during weight cuts, injuries, losses, training camps, and even my emotional obstacles as the only woman on the team. Yet the most important is what they will never see. They will NEVER see me quit!

In 2013, still a brown belt, I injured my knee at Pan Ams. This was the year I had qualified for the World Pro Cup in Abu Dhabi, and I was the returning female middle weight brown belt IBJJF World Champion; and I was injured! Injured or not, I was not going to quit. I made it to Abu Dhabi and to the Worlds. While it was not my year to win because I re-injured my knee in Abu Dhabi, it was my year to be an example to my team, and show that the only things that will hold us back are the things we let hold us back!

I am now fully recovered from my injuries, and for those who ask, I would not do anything different if given the choice again. I learned to train smarter versus harder. Had my knee not felt up to the task of stepping on the competition mats I would have listened to my body but I was not going to quit before trying, and I was not going to make that decision before competition day. 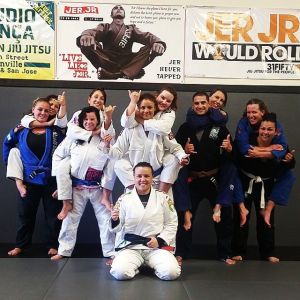 Black belt is by far the hardest rank for me physically, and mentally but also the most fulfilling! At 31 years old I compete against women 10 years younger who have trained and competed in BJJ twice as long. Jiu-jitsu has also evolved to a very strong level, and requires a lot of mat time to keep up. I love the challenge, and want to be a world champion again, and I know with my continued hard work my day is coming. Despite its challenges I could not imagine living my life any other way.

Jiu-jitsu is not easy. It will test you mentally, and physically. Jiu-jitsu will break you down before it builds you back up but what it makes you is so much more than what you would have ever become without it. I believe that all women should train even if for nothing more than self-defense. Every mother, daughter, sister, and friend should give this to themselves, and each other in this world. Thankfully there are many women’s jiu-jitsu programs now so the opportunity is there; be the example!

What advice would you give to women who think about quitting? 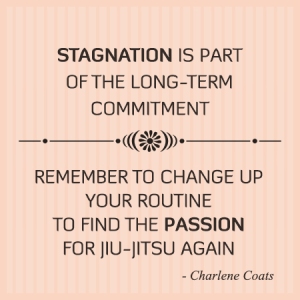 If you feel beat down, injured, stagnant, the odd one out, or are being pressured to spend time off the mats by others in your life, my advice is: KEEP TRAINING! Train right through those feelings until you love jiu-jitsu again; until those voices are silenced by the love of a good choke hold. If you love jiu-jitsu, the people who truly love you will only encourage your journey, and commitment! Love is supportive not resentful or selfish. Sometimes there is a balance or compromise to workout but quitting should NEVER be the answer!

If you are injured, go to class! Watch, study, learn, and do what you can to keep your routine. If you break the routine, it is much harder to come back; make it easier on yourself! If your leg hurts practice chokes and work on grips. If your arms hurt, escape your hips. There is always something you can do.

Stagnation is a part of the long-term commitment; remember to change it up, work with kids or lower ranks to help re-inspire your passion for jiu-jitsu. Also no one is ever the odd one out. If you think you are, remember, you are really a pioneer, and soon enough your courage will make someone else feel like they can train too!

Lastly, if money or time is your issue, speak to the instructor. There is often a way a student can be helped when it comes to time, and money. Instructors want to share jiu-jitsu, and want their students to succeed. Sometimes there is something you can help your academy with in exchange for lessons, and sometimes it takes a third-party to see where you might have time to give yourself what you want! Remember, we all have a choice when confronted with an obstacle; quit or believe and overcome. I will always choose the latter because quitters never succeed!

Here’s a recent podcast Charlene did with Inside BJJ! Enjoy!