Women’s jiu-jitsu open mat Girls in Gis got started in Houston, and the first DFW area event was held in December of 2009 at Alvarez BJJ. On November 11th, women and girls once again are gathering at the same place to celebrate the 9-year anniversary of Girls in Gis. The highest ranked women in 2009 event were purple belts; this year there are five black belt instructors leading the open mat. The first open mat at Alvarez BJJ attracted 25 women and girls which was unheard of at the time. It was so unusual to see a group of women training that even men stayed and watched. 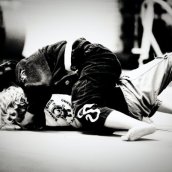 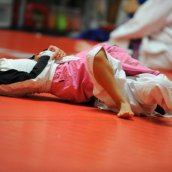 The instructors are Fabiana Borges (Gracie Barra), Danielle Alvarez (Alvarez BJJ), Chelsah’ Lyons (MG Dallas), Karen Lingle (Genesis) and Nathiely de Jesus (Rodrigo Pinheiro BJJ). In 2009 Nathiely and Danielle were white belts, Chelsah’ and Karen had not found jiu-jitsu yet; they started training in 2010 and 2012 respectively. All these ladies are now black belts and high-level, decorated competitors with world champion titles in gi and no-gi. At that time Fabiana was a multiple time Brazilian National Champion in different belt levels, had been a black belt for two years, and was on the move to the US to join Gracie Barra American Team.

From 2009-2015 Girls in Gis event flyers were exclusively designed by Fenom. The font on the first flyers was abandoned in the middle of 2010 and replaced by the swirly font that is used by GIG until this day. The flyers were provided free of charge to help the women’s BJJ organization that had yet to produce income. Years later when GIG started earning profit from t-shirts, patches, gis and participation fees, it was time to hand the flyer design work back to the organization.

Lots has changed over the years. During first years of GIG, all events were free of charge, less formal, and organized in Texas. In recent years GIG chapters have opened up in a dozen states, and most events require a suggested donation in addition to online registration. Brand ambassadors help schedule, oversee and run events. Thousands of women and girls have participated, some have quit training, some are on break but many more are still training and rising in the ranks. The goal the get more women into jiu-jitsu has been achieved, the number of female black belts have sky-rocketed, and tons of other women’s open mats all around the country have sprung up. We wish Girls in Gis a very happy birthday and can’t wait to see what happens next!