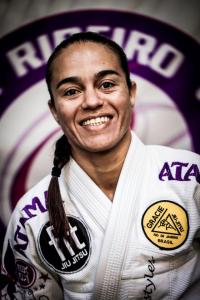 Leticia Ribeiro started her jiu-jitsu training in Brazil, at Gracie Tijuca academy, in 1994. She fell in love with the sport, trained 2-3 times a day, and received her blue belt in three months. Leticia holds nine world championship titles, seven in gi, and two in no-gi. She has been competing at the Worlds ever since the women’s divisions were introduced in 1998. She received her black belt from Royler Gracie, and Vinicius Aieta in 2000, after winning her first title in the black belt division. In 2008 she moved to California, and started leading Gracie Humaitá female team. In 2013 she opened her own academy, Gracie South Bay. Leticia is a third degree black belt, IBJJF Hall of Famer, and one of the busiest instructors teaching women’s jiu-jitsu seminars and camps all over the world.

Which belt level has been the most challenging for you?

White belt was the hardest for me. When you start training, you don’t even know how to move your body. Everything is new, even hip escape, and shrimping are difficult movements. When you get closer to the blue belt things become easier. You start to understand the game more, have better control of your body, and breathing. That’s when the fun really starts! I felt that after my first armbar. I thought: I love it, I want more!

Tournaments were tough back when I started training. There were only two divisions, and all belts together for women at the first Worlds in 1998. After a few years they separated blue belts, later on purple belts, and now we have all belts separate. I’ve seen the evolution of the women’s jiu-jitsu from the very beginning. I’m very happy with the progress. We have lots of good, technical fighters now. When I was a white belt, we did not have a lot of girls but I was lucky to have Leka Vieira to look up to. She was always two belts ahead of me, and had her female team. She has always been a huge inspiration for me.

What advice would you give to women who have a hard time in training? 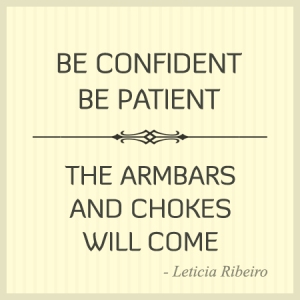 My advice to all the women who train BJJ is to keep going! Be confident, and be patient with yourself in the learning process. The hard times will pass, and the armbars and chokes will come. It is great if you want to compete, but it is also okay if you don’t want to compete. Jiu-jitsu is for everyone, it will help you in different aspects of your life.

It takes away all the stress at work, kids, family, and everything else that can disturb your day or sleep. Many people say that they don’t go to train because they are too tired from work. To me it sounds like an excuse. No excuses! After work get your gi, and go to class. I can guarantee that you will feel much better after training. Enjoy being on the mat not just to train but to enjoy your team who is your new family because your jiu-jitsu academy should be your second home. Good luck and good training!