Our fenomenal woman series travels to the Middle East this month. Rana Qubbaj from Amman, Jordan was kind enough to talk to us about her life and women’s jiu-jitsu in her country. She is a blue belt, one of the highest ranked ladies in Jordan, and the first woman from an Arab country to win medals at IBJJF tournaments. Everyone meet Rana Qubbaj! 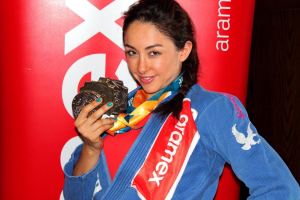 Tell us a little bit about yourself!

I’ve lived in Jordan all my life. I have a Bachelor’s Degree in Electrical Engineering, and I work full-time at a local telecom company in the information security and business continuity department. When I am not working or training BJJ, I am usually working out. I like to go to the gym every day. I enjoy a good run, and do some rock climbing and hiking. Recently I started to work a little bit on photography, mainly to be able to take nice pictures at the tournaments. If there is any time left in the day, I try to read a good book.

How did you find BJJ?

I train at Source MMA in Amman, and I am a blue belt under four dan black belt Master Samy Aljamal. I have been training for about 3 years. Before that, jiu-jitsu never crossed my mind. I never imagined I could do any type of sport to be honest, let alone compete in a combat sport. Sport is not part of the culture here in Jordan, and I was no exception.

I was in the early twenties, very unfit, and overweight and that actually scared me. I went to visit some local gyms for about a year but didn’t find what I really liked. I kept looking until I stumbled upon a no contact kickboxing class that coach Samy was offering at our school. I joined the class and liked how it changed me. But still I wanted something more. That is when the coach introduced me to BJJ and it has been growing on me ever since.

Tell us about women’s BJJ in Jordan? How do men view women on the mat?

The BJJ scene has changed since I started. I began training with another girl from our kickboxing class. We were the only girls doing BJJ in the whole country at the time! It was a little awkward stepping onto the mat at the beginning. If I arrived early, I would wait for my friend so that I didn’t have to walk in alone. Two girls joined about 2 weeks later. Now we probably have 15 women training BJJ in Jordan. I’m very happy to see the numbers growing.

However, it still is not enough women and that is one of the problems we have to deal with here. There are no higher than blue belt ranked women to train with. I’m 5’9”, so I can be easily the tallest woman on the mat as well. Not a very good situation if you are preparing for a tournament. 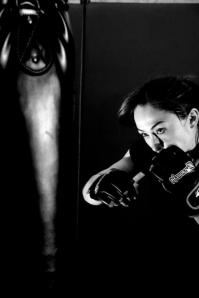 As to how men view women on the mat, if we are talking about team mates, they are very supportive. We probably face the same issues as other girls do, who train at any gym in any other country. In the beginning however, guys had never trained with women, it was all new for them as well. Some were fine with it, some were against it. Some thought we would not last, some thought it was unacceptable for women to train, since the Middle East is still very conservative.

It is different than the rest of the world but I think this is always the case in the beginning. Anything new is viewed with resistance and suspicion. Now the number of women training has grown, and women have proven themselves on the mats. We are part of the team and part of the family just like the men. Outside the school, people are beginning to accept it more as well. Partly because more girls are engaging in martial arts and because you stop doubting yourself at a certain point.

You travelled to Brazil this summer to compete at Rio Open. How did you do? Are there any tournaments in Jordan? 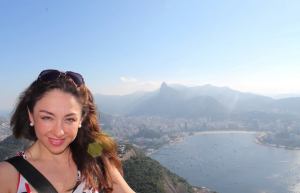 I love to compete but unfortunately we do not have girls’ tournaments in Jordan. Very few girls train, even fewer want to compete, and by the time we get divided between belts and weights, there is one girl in each bracket. I am trying to compete outside of Jordan as much as I can even though it’s not easy. I was lucky to make it to Rio Open in July and it was a bless.

Competing in Rio is different from competing anywhere else! It was a lot of fun, I got a silver medal. It was also a great experience to train at master Fabricio Martines’ academy which we are affiliated with. They had more black belts than other color belts on the mat! It was like jiu-jitsu heaven for me! Rio is so beautiful, lovely beaches, amazing scenery, and friendly people. I will try to go back there again as soon as I can.

Do you travel to any women’s BJJ camps or seminars in any other countries?

So far I have not been able to attend any camps or seminars. I would love to do it though. I would love to experience an all women open mat as well. It looks very tempting when I see all the ads online. My BJJ traveling is limited to competing at this time. I’ve been to European Open twice and to London Open once. I always carry a gi with me and train wherever I can, just to learn as much as possible.

What are the biggest challenges for you? Have you wanted to quit at some point?

I think my biggest challenge is not being able to compete enough. In a perfect world I would love to compete every other weekend. Not having local tournaments and having to travel far limits my ability to compete. I cannot always take time off from work and travel can be quite expensive. Also managing work and training is somewhat challenging. I have a demanding job from nine to six. 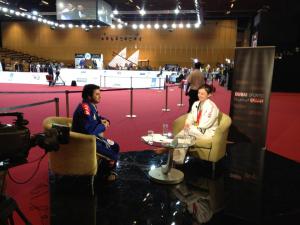 In the beginning I considered quitting a few times actually, but these thoughts have not crossed my mind for a long time now. I know I want to train for the rest of my life, even after I receive my black belt.

My biggest motivation to train is the love of the sport. I look forward to it every single training session. I never train out of obligation or guilt. I want to be on the mat. Having mini targets to accomplish always helps as well. Trying to master a specific sweep or submission can be quite a motivator. Coaches help me a lot too, they do their best to keep the women coming back.

What does your family think of BJJ?

In Jordan, we live with our parents until we get married, so hiding my gis was not an easy task in the beginning. Thank God, I am over that stage now! They know that BJJ is an important part of my life and they accept it. My two sisters always thought it was cool. One of my sisters started training about a year after I had started and the other one started just a few weeks ago. My brother still does not think that it is a great idea but we agree to disagree 🙂

I just want to thank my sponsors Arab Orient and Aramex, also my coach and my team at Source MMA, and everyone who support women in jiu-jitsu! 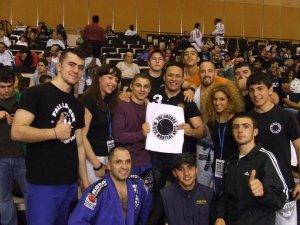