Women only tournaments are popping up everywhere. Garra Jiu-Jitsu Darra is hosting a girls’ and women’s white belt and blue belt tournament on May 9th in Brisbane, Australia. Cash prizes for blue belts are $200 for the first place, and $100 for the second place. Two weeks later, on May 24th, Australian Girls in Gi is hosting their 4th annual tournament on the West Coast of Australia, in Perth. It is a round robin style tournament for girls, and women of all belt levels.

On May 23rd, 16 female blue belts have a chance to win cash prizes at BJJ Top Tournament in Burbank, California. First place gets $300, second place $150, and two third places receive $80 each. A few weeks later, on June 13th, Texas-based Women’s Jiu-Jitsu Federation is holding its 2nd Annual Southern Regional Championship, in Justin, Texas. The tournament benefits three charities: Hope For The Silent Voices, Rescue Her, and Restore Her, and offers both gi and no-gi divisions to girls, and women of all belt levels.

If competition is not your cup of tea, please check out Sophia Drysdale BJJ Camp in Edmond, Oklahoma on June 6-7. She is offering two days of training for a hard to beat price of $70. Enjoy! 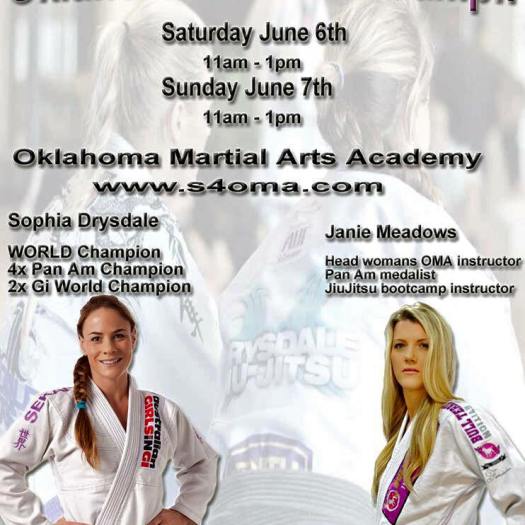